Carema Hotels’s Menorca underground: caves and grottos to enjoy all year round

Menorca underground: caves and grottos to enjoy all year round 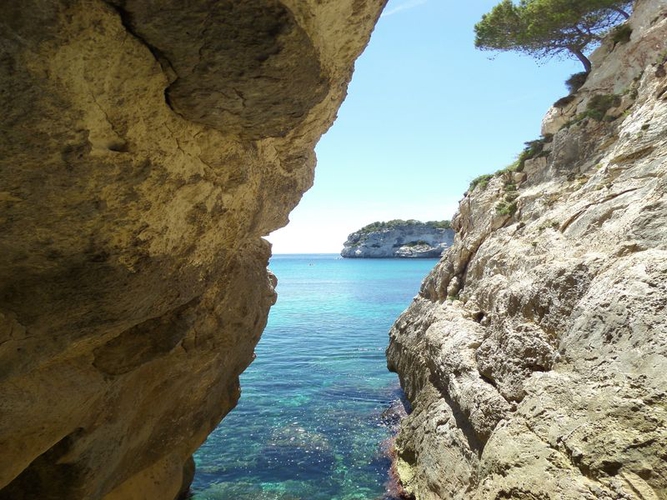 If we were to compare the number of beaches to the number of caves in Menorca, you just might be surprised by the result. The terrain’s typical limestone terrain means that it often looks like a slice of Gruyere cheese (though, if you're going to have cheese, by all means make it a local one!)

Ready to discover Menorca's hidden caves? On these outings you will also have the chance to travel back in time and discover how the island's first settlers of the island lived - and died.
Caves and grottoes for everyone

If you're only on the island to unwind, and are not looking for lots of adventure, we have a list of places that will still leave astonish you. Aim for the easily accessible caves if you are travelling with your family.
Access by car

1. Necrópolis de Cala Morell. Located by the residential development of the same name, this group of caves was a site of eternal rest for prehistoric settlers; specifically, from the Talayotic and pre-Talayotic eras. You will find a route signposted, with explanatory placards taking you back to those primitive times.

2. Cales Coves. Located on the cliffs of the famous Alaior cove, Cales Coves is the largest group of caves in Menorca. Some of them were created artificially, for use as burial sites. Numerous finds have documented funeral rites from different eras. It rose to fame in the 70s, when groups of hippies actually settled in them. Since then, access has been restricted in order to preserve them, although some of them may be visited.

3. Coves de Montefí. Just before reaching Ciudadela we come to the Talayotic village of Montefí. Here you can visit some artificial caves that were used as the town's necropolis.

To enjoy an outing

1. La cueva Des Pardals (cave) This little cave was used as a jetty. The colours of the different rocks and the reflections on the water make this cave a landmark site amongst hikers of the Camí de Cavalls trail, as it is located along one its section from Cap d'Artrutx to Calan Turqueta.

2. Cueva des Coloms. Also known as the Cathedral of Menorca, for its striking size. It is located in the Binigaus ravine. You can begin your excursion from the beach of the same name, or use the route that stems from the path of the Es Migjorn Gran cemetery. The name Coloms (pigeons) is due to the fact that it was once a haven for this type of bird. Some experts say that its large dimensions suggest the existence of a large channel of water in its past, and that the back of the current cave is just a barrier that blocked that old body of water.

For true cave explorers: Sa Cova Murada
If you are daring and like adventure, there is a cave in Menorca that you cannot miss: Sa Cova Murada. Its history is full of magic, to the point that it even has a legend of its own. Access is not signposted, so if you are interested it is best to ask a local to accompany you. This grotto, with several cavities featuring stunning stalactites and stalagmites, is one of the walls of the Barranco d'Algendar (ravine). To access it you must descend the face of the wall. Thus, the right shoes are a must, along with a snack for along the way. But the destination, without a doubt, makes it all worthwhile.

Now it's your turn to share your experience with us. Are you curious to see what Menorca is like underground? Have you visited any of the places we recommend? Tell us what it was like.
Return
Share